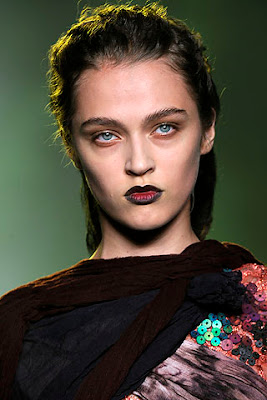 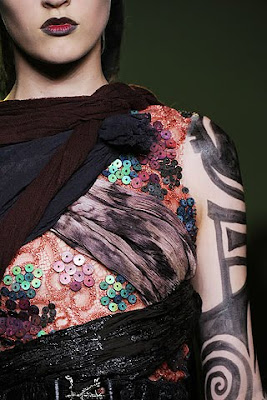 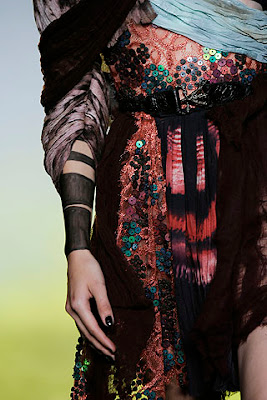 The fact that Rodarte shows as a ready to wear concern is quite astonishing. The much loved sister act of Laura and Kate Mulleavy get their hands dirty in every single scrap of fabric they use to construct their incredible garments. The shredding, dyeing, stitching, smudging, scaling, sanding, and staining are all done by the ladies of the line. The results are incredible to see in person. In fact, I venture to say that if you are a fashion fan, you haven't quite lived until you've experienced a Rodarte garment up close, with all of your senses, especially your fingertips. Theirs are the only garments I've seen in a long time that don't induce rage at a high price tag. You can see the work, the time, the effort in their clothing. It's a work of art, and priced accordingly. 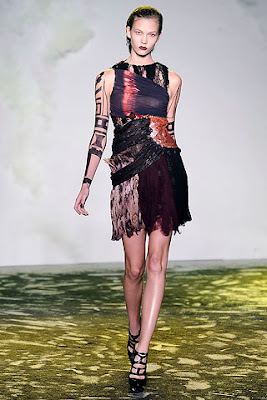 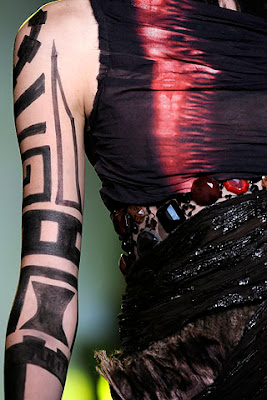 This season the ladies showed a collection that emerged from a runway clouded in green mist. With the backstory of abandoned women crafting together their own wears from bits and pieces of found clothing after an encounter with some detrimental forces, the show featured overtones of warrior women. Inked in thick black tattoos and donning black-blood-red lips, the post apocolypse catwalk looked punk rock and heavy metal. Studded, zipped poured on pants met ankle high, equally studded stilletos that can only be called hardcore. Dresses were pieced together of variously tortured fabrics. 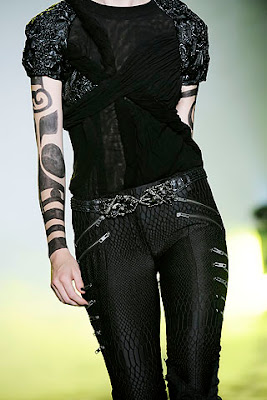 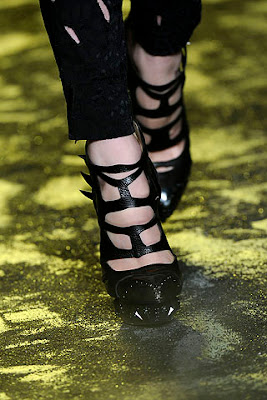 It's interesting to me that the clothes actually swirl around a sentiment that's been popping up in fashion coverage lately, the idea of streetpeople as inspiration. I'm not talking about hip streetstyle, I'm talking about actual homeless people. People who make outfits out of something most would think of as nothing. There was a recent article penned by Cathy Horyn in The New York Times about this very subject and I think the Rodarte collection falls right in line with this. Now, the juxtapoition of those down on their luck and dwellingless, and the superriche garments of a design duo that go for thousands on the well constructed minimalist floors of Barney's isn't made as an insensitive or naive comparison. I'm not saying that the homeless are cute, fashion source material. Not in a trite way, at least. 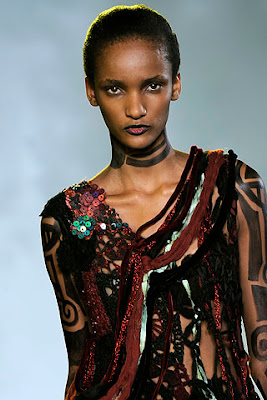 In terms of the Rodarte collection, the idea that the materials were treated as scraps and refuse individually and brought together to make something functional, something beautiful, is really what draws the line of conncetion. Well, okay, maybe not the straightest line. Let's scale back on the severity a bit. How about the idea of making the best of what you have, when you don't have much? That's the place a lot of us shoppers are finding ourselves in now. Without the disposable income, our disposable clothing is also not being disposed of quite so often. How do you take what you wish you could get rid of, what you were intending to wear once and toss, and make it fresh? New? Like new? If you are the Mulleavys you weave and stitch and sew. You dye and bedazzle and wrap. You shred and burn and scissor. You make materials raw and you build things anew from scratch. 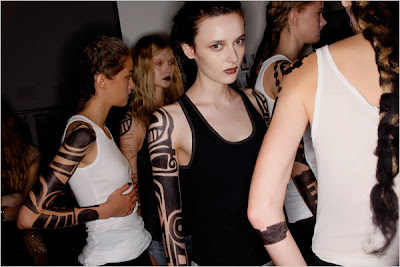 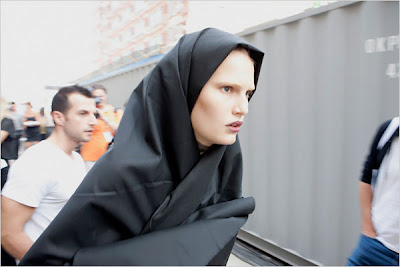 Models backstage at the Rodarte show.
That is what I love so much about Rodarte. You can see the creativity so evidently, so clearly, so wonderfully. Also, they seem like they would be excessively cool to hang out with.